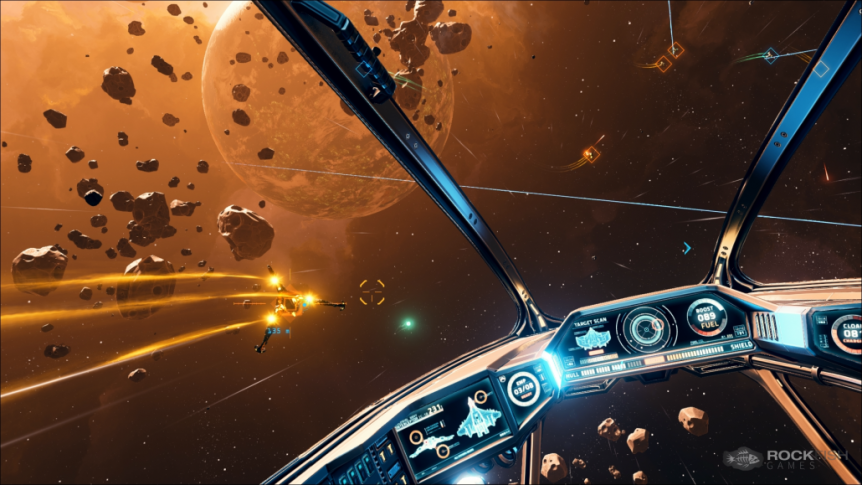 ROCKFISH Games‘ rogue-like Space Shooter EVERSPACE has been successfully financed with 186% of its planned goal reached through its Kickstarter campaign. This makes EVERSPACE the most-funded German videogame on Kickstarter by far. The funding campaign continues on the EVERSPACE website at http://everspace-game.com/ to reach further stretch goals.

EVERSPACE made its debut on crowdfunding platform Kickstarter on August 6, 2015 during gamescom 2015. EVERSPACE was off to a great start with more than 1000 backers within the first three days. Half-way through the campaign and immediately after reaching the funding goal, the campaign received an additional boost when Chris Roberts, as “Chairman of Robert Space Industries”, called upon around a million of Star Citizen Fans to support EVERSPACE. In combination with high quality GIFs published on imgur [gallery 1 / gallery 2] and Reddit, which made their respective front pages, this resulted in an additional 2000 new backers within 48 hours, adding another third of the initial funding amount.

Three essential factors contributed to the large sum of EUR 420.252 / US-$ 472.123. About a quarter came together via Kickstarter itself, through search requests and editorial promotion on the platform. Over 40% were collected via direct Google searches for EVERSPACE or its Kickstarter campaign, signaling the high publicity the IP had already garnered. An additional 35% were in equal parts gained directly via Reddit and imgur, the Robert Space Industries forum as well as through the EVERSPACE website at http://everspace-game.com/, where the funding campaign will continue in hopes of unlocking further stretch goals for the supporters. Since the campaign ended, ROCKFISH has gathered an additional EUR 17.329 / US-$ 19.587 this way, meaning the hardcore mode, which will be unlocked once EUR 450.000 / US-$ 500.000 is reached, is a very near possibility.

“We believe we’ve hit a nerve with the community and especially our “Galaxy on Fire” fanbase, not only due to the high quality of EVERSPACE, but mainly through our positioning as a single-player rogue-like Space Shooter, which helped to successfully engage them” said Michael Schade, CEO of ROCKFISH Games. “Intensive PR work during gamescom and all throughout the campaign and the continuous updates on Social Media Channels such as Facebook, Twitter and especially Reddit and imgur, as well as cross-promotions with other Kickstarter projects such as Star Citizen, GRIP, Divinity 2 and Battle Heroes: Nightwar were certainly an important element of this success. Our campaign proves impressively that Kickstarter can work for high quality indie-productions such as EVERSPACE as well and not just for legends of the developer scene.”