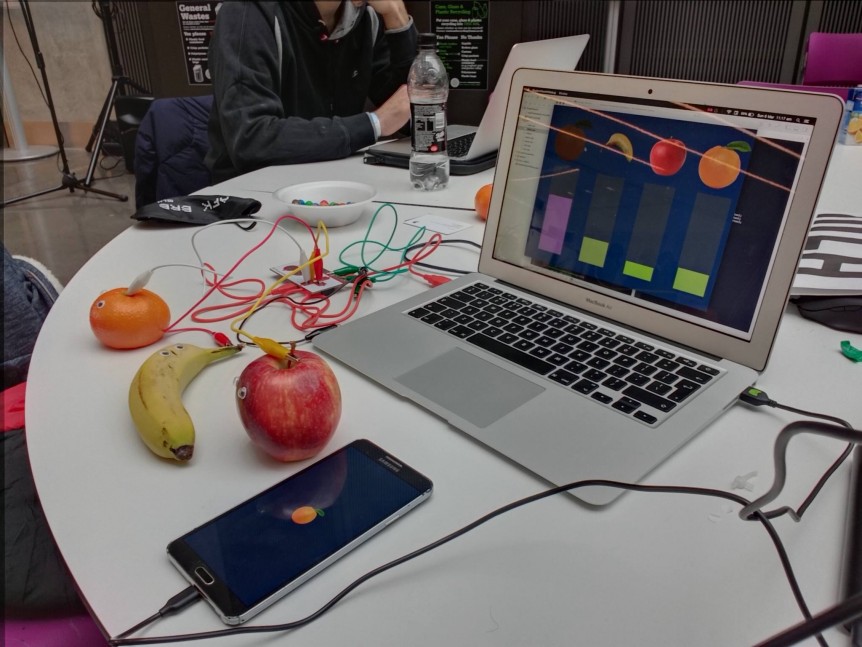 Rotten was the project I made during StudentHack IV, a 36 hour MLH hackathon in Manchester; 4-6th March 2016.

Like most hackathons I go to I went with no ideas and a big imagination, I also brought along my Makey Makey because I like exploring weird game input and it would let me use anything as an input device for my hack.

After a few hours of no ideas I decide to make something basic. I was going to connect some fruit to be used as buttons and a game where users had to rapidly tap the fruit to win.

Tap fruit to make it more gross and fill up the bar, keep tapping until it rots, first to make their fruit rot wins.

I managed to get ahold of an orange, a banana and an apple. I was planning to add another fruit in at the end but could not find one, so used another orange.

I doodled some rough sketches down of what I wanted the game to look like and finally began to code.

I made a little game in OpenFrameWorks that lined up each fruit with a bar underneath. As the user pressed buttons the bar filled and the fruit got darker. When the bar filled a screen came up saying which fruit won.

I then wired up the fruit to the corresponding buttons.

The game was pretty cool, but only 4 people could play at once, and it was a bit awkward tapping/squeezing fruit.

So I made an android app to go along with my game. Using OSC I was able to send messages to my game saying what fruit was tapped. I made the app in processing.

Now as many people as I wanted could play, as long as they had an android device.

I finished my hack with enough time to spare so I was able to get some sleep.

I didn’t make it to the top 10 or win any prizes this time, but it was a good learning experience and a lot of fun.