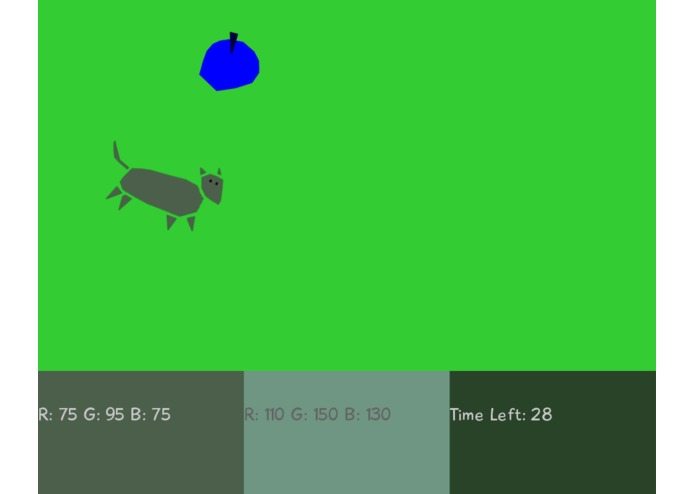 During the first few hours of the Hackathon I had no idea what I should or could do for my hack.
Wanting to take inspiration from something new, so I left my table the friends I came with and found someone new to speak with.
I ended up randomly asking them “What is your favorite animal, colour and programing language.”.
Their reply was; panther, red green and blue and c++.

For the sake of starting a project I went with what they said. I already knew some c++ and I like games so decided to make a game in openframeworks.

The elevator pitch was something like:
During the game you play as the panther collecting fruit that makes you change colour. Your aim is to collect fruit until you become the same colour as the one randomly picked at the start of the game, before the time runs out.

The game was pretty cool, the fruit speeds up as time progresses and the panthers animation become bigger, but it was a bit easy to play.
I finished making the basic game pretty early, which gave me plenty of time to socialise, have fun and sleep.

After I did all those things I jokingly suggested adding machine learning to our next hack, or even this one.
Like most jokes I make I ended up following it through and with only 2 hours before the deadline I was able to integrate Wekinator into my project, by adding OSC into my game as an input and using a demo processing sketch that outputted the webcam as OSC messages.
I then trained my game to be played by the objects I had around me. Which was an unopened coke can and a rubber duck.

When you hold a coke can to the webcam the panther moves up and when you hold up a duck it moves down.

My project impressed a lot of people, some passing by wondering why I was holding a duck up to my laptop but also thankfully the judges.

I made it to the top 10 finalists and was able to present in front of everyone at the closing ceremony. This can be viewed here.
(please note I was on 2 hours sleep and needed to pee while giving this presentation)

After I delivered my presentation and watched everyone else do theirs I ended winning a prize for being JP Morgan’s Choice and left with a quadcopter.
As I was leaving Bloomberg (another sponsor at the hack) who also liked my project gave me a mini quadcopter, as they had some left over.