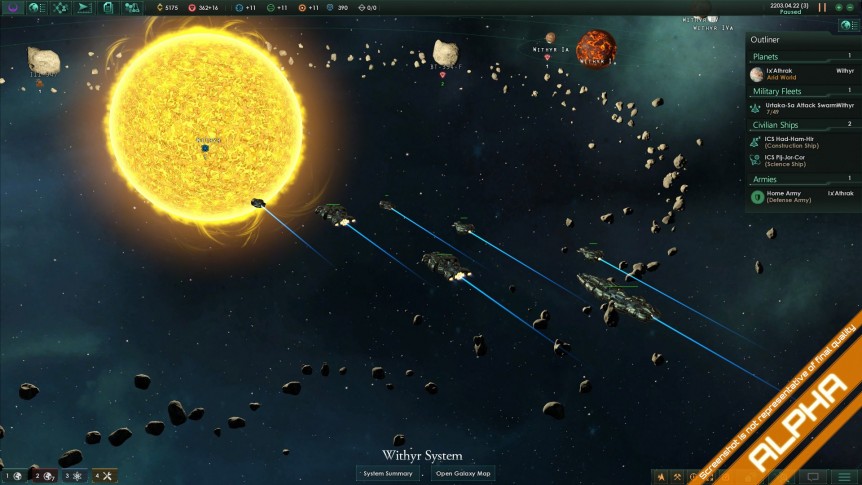 Paradox Interactive revealed at Gamescom a brand-new game from Paradox Development Studio, the grand-strategy design team behind the Europa Universalis and Crusader Kings series. Paradox is proud to announce Stellaris, a grand strategy game set in the far future. Henrik Fåhraeus, the lead designer of the hit medieval strategy role-playing experience Crusader Kings II, turns his eyes to the stars in a science fiction strategy game that will be about more than just building empires in the skies.

For millennia our race has developed, explored and battled for control of a planet. Now we turn our eyes beyond our own solar system, to other stars in our galaxy. New planets, new discoveries, maybe even new civilizations await us. And Paradox Development Studio, the masters of grand strategy, will be your guides on this new voyage.

With a dynamic decision system and a heavy emphasis on exploration and science teams, Stellaris gives you much more to research than bigger lasers or stronger hulls – though you’ll need those too. Space is very big, and your first step will be getting a grasp of just what is around you and how it can be best used for the benefit of your civilization.

Thousands of planets populate procedurally generated star systems giving you the largest possible theatre for performing the emergent stories that Paradox has become famous for. Customize your ships, encounter unique randomly generated races, and participate in advanced diplomacy that would make Picard look like an amateur.