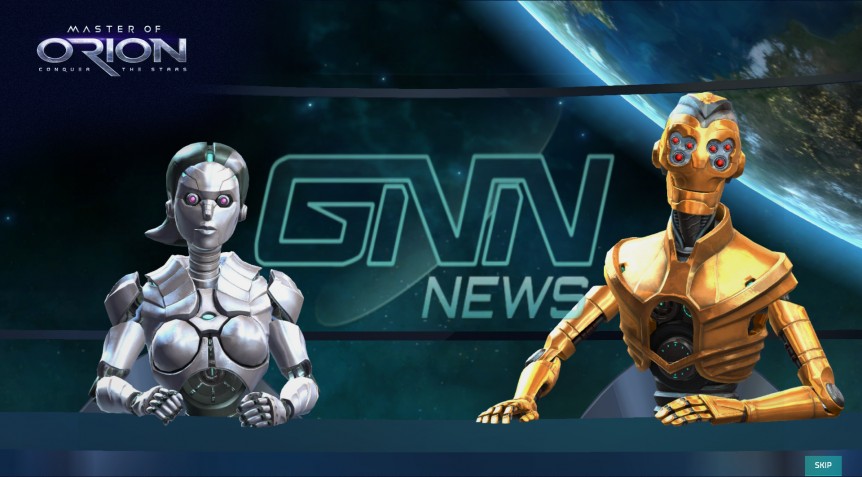 Tune in for an exclusive Galactic News Network (GNN) broadcast to get a first look at Master of Orion’s campaign in action. Let the quirky, robotic GNN anchors be your interstellar guides with a breaking news report on the fearsome Sakkra and the ancient and intelligent Psilon Quanta.

As the broadcast continues, discover how various game mechanics will function, as each galactic news segment details everything from interstellar warfare to specialized research to diplomatic negotiations with other races. During this exclusive exploration, learn more of the potential dangers lurking in the star lanes, whether they be battles against malevolent forces or encounters with other races whose intentions are always in question.

Master of Orion is a modern rebirth of the critically acclaimed sci-fi strategy game. The forerunner of the influential “4X” style of gameplay, Master of Orion captured the imagination of gamers around the world. Its deep, strategic gameplay offered numerous ways to win—through brute force, diplomacy or resource domination.
Developed by Argentine-based NGD Studios and with key members from the original title’s team, Master of Orion stays true to its renowned 4X gameplay.

Enhanced visuals, built from the ground up, breathe new life into the vast galaxy available to explore and conquer, as well as give new personality to the many races which call it home. Players can expect a revamped user interface, an orchestral score from the original game’s composer, voiceovers by well-known actors, new user tutorials, and more to deliver a classic yet fresh experience to one of gaming’s most respected franchises.

Master of Orion builds on the iconic 4X gameplay of explore, expand, exploit and exterminate that the original game pioneered. This reimagined title stays true to its legacy, delivering on the promise of deep strategy, hard fought battles, diplomacy, and exploration—all with a healthy dash of humor.

Players can expect a fresh set of unique races, each offering different styles of play, thousands of ever-changing galaxies to discover, hundreds of unique technologies, dozens of ships waiting to be tested and a variety of structures to aid in their galactic conquests.
Official website: