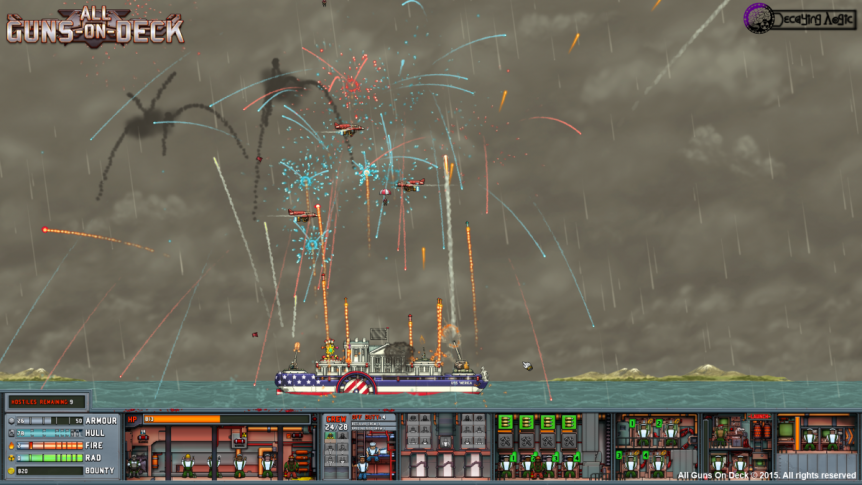 Kiss Ltd and UK based Independent development studio Decaying Logic are pleased to announce the release of the third update for their critically acclaimed action-strategy RPG ‘All Guns On Deck‘.

All Guns on Deck released on to Early Access on 28 August 2015 to universal acclaim, with critics praising the unique gameplay style.

So, what’s new in this third update?

“As always, we would like to take this opportunity to thank the Steam community for taking their time and effort to feedback to the developer”, commented Darryl Still, CEO of Kiss Ltd. “With their help the developer is set to realise his ambitions”.

Players of All Guns on Deck can expect additional updates based on player feedback to be issued in the near future.

All Guns On Deck is a unique hybrid game, combining strategy, action RPG and naval combat gameplay with a unique battle system and an unforgiving world to conquer.

Play the role of a naive young sea captain, eager to take to the waves in support of the great nation of Eutopia and their on-going war effort. In an effort to get the upper hand against the superior aerial power of their foes, the Eutopian Generals decide to focus their efforts on reviving the lost art of ship building. Hiring small bands of mercenaries, take to the seas and launch a global attack on your enemy’s ports and cities, whilst battling their air forces.

The player can switch between one of two awesomely brilliant gameplay styles at any time in the game. Simply take control of the über powerful guns on your ship and blast a hole in the enemy’s aerial forces. Or test your military tactical skills to the full by managing your crew and their resources. You can flip between gameplay styles whenever you want.