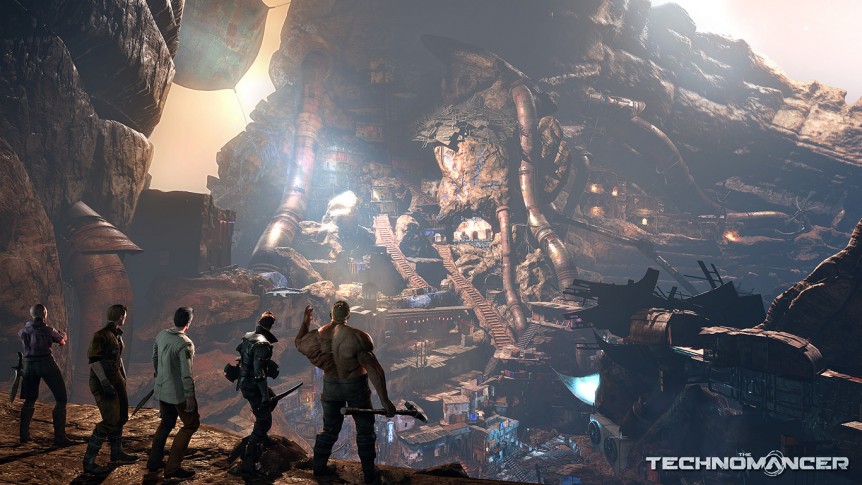 Spiders’ fifth RPG, The Technomancer, is officially revealed in detail in its First Contact Trailer. Slated for release in early 2016 on PlayStation 4, Xbox One and PC, take a first look into the world of The Technomancer, and learn about the three dynamic and exciting combat styles:

Staff: Highly mobile long-ranged melee to hit multiple targets.
Rogue with knife and gun: Agile, mobile, with dodges, rolls, and effective CC with the gun.
Protection with mace and shield: Parry, block, and beat them to death with powerful attacks!

Each of the combat styles can be imbued with electrical Technomancer powers, buffing their damage, as well as Zachariah being able to directly use his skills in battle, electrocuting, knocking out in stealth, and pounding back his foes on the Red Planet.

In the video, you’ll see Zachariah fighting and exploring throughout the markets and shanties of Noctis, one of the major cities in The Technomancer, where over a hundred years of separation from Earth, new cultures, clans, and super-powers formed throughout Mars, causing clashes and in-fighting across the red planet.

It’s not all about the combat, though, with a deep, modular crafting system changing the visible and active qualities of clothing and weapons from scrap you find on Mars. Cut off from Earth for 120 years, Mars is a world in conflict, with many different cultures and communities – and the games weapons and clothing reflect this quality, with jury rigged and make-shift weapons and armor, designed for survival, or militaristic rule!

From melee combat skills to active and passive abilities, everything can be unlocked and upgraded in the ability tree, where you’ll be able to improve the games’ three combat styles, and also your technomancer abilities as you level up and gain XP.

There are up to five different ways to finish quests in The Technomancer, and your choices will affect the story ending.