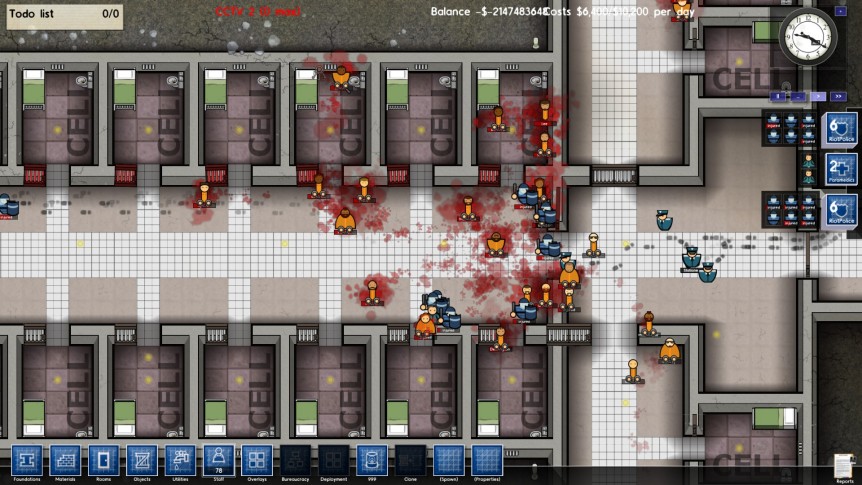 Brand new story, all new mode and support for every language on Steam to be included on Oct 6th.

Introversion are proud to announce that the launch version of Prison Architect includes a brand new story and a new mode: Escape Mode.

Prison Architect opens with the story of Edward, a man facing the electric chair for committing a crime of passion. Introversion have extended this with four additional chapters focusing on different characters and aspects of prison life. From Mafia Dons to power-crazed senators, Prison Architect brings these characters to life. Introversion teamed up with award-winning professional writer Chris Hastings to produce an enthralling tale of corruption and human misery set against the background of the modern prison industrial complex.

Escape Mode sees the traditional Prison Architect gameplay turned on its head. Take control of an individual prisoner, load any of the tens of thousands of prisons uploaded to the Steam Workshop and get on with the important business of escaping. Earn experience points by shanking a guard, form up a posse of rough-necks and head to the armory to shoot your way out or steal some tools from the workshop and start digging a tunnel hidden behind a picture of Raquel Welch.

The game’s open-ended sandbox has drawn in more than 1.25 million players since it was released into early access in September 2012 and with the addition of new, more linear styles of gameplay the new content will delight the existing audience and bring new players into the Prison Architect world. Oh, and we mean world, as the full release has been localized into all 25 languages used by the Steam client ….

Want an extended tour of the new facilities? Mark and Chris ran through the new features at the show: