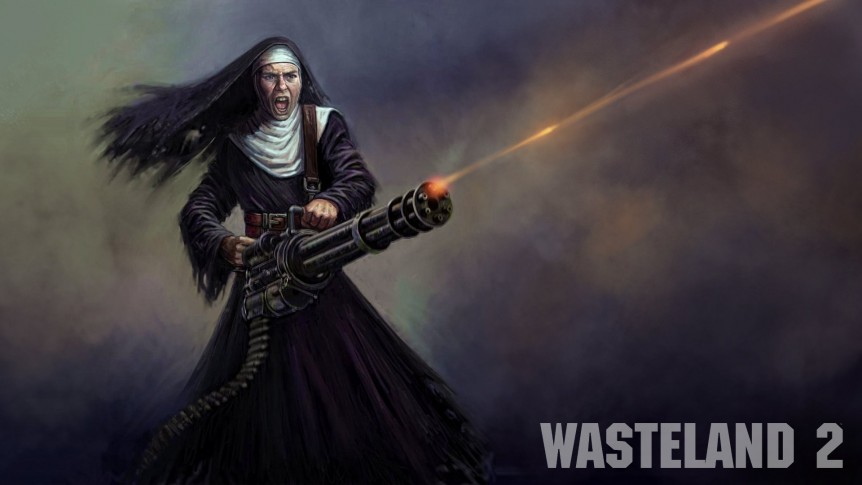 Wasteland 2 Director’s Cut is out, ready to expand and refine what already was a great RPG game. While Brian Fargo talks about the post-apocalyptic inspirations on the first Wasteland, let’s take a look at the trailer and features.

Take control of your squad to overcome your enemies. In Wasteland 2: Director’s Cut, combat plays out in turn-based mode, with each character acting in order so you can precisely execute your plans. With dozens of unique enemy types, from roughshod raiders, to vicious mutated animals, to highly-trained mercenaries, to synths made out of flesh, plastic and steel, each battle will present a unique challenge as you position your squad, pick your shots, use terrain to rain lead from above, and take cover to avoid counter-assaults.
Plan & Execute

Wasteland 2: Director’s Cut gives you more options than ever to come out victorious. Destroy an enemy’s cover to leave them defenseless. Use your heavy machine gun to supress an enemy while your shotgunner covers the flank. Use the Ambush feature to hold back and wait for the enemy to march right into your sights. Crouch down to stabilize your aim, trading mobility for accuracy when you need it most. Fire on an enemy with Precision Strikes to soften up their armor, blow their gun to bits, or leave them knocked senseless.

Your squad’s unique Quirks and Perks will also offer new abilities as you advance through the game. By customizing your squad’s weapon training and equipment, as well as nearly 20 character-defining Quirks and nearly 90 Perk upgrades, you’ll be able to create a capable team of Desert Rangers able to take on any threat.

Wasteland was a pioneer in multi-path problem solving, dripping in choice and consequence and eschewing the typical one-key-per-lock puzzle solving methods of its peers, in favor of putting the power into players’ hands to advance based on their own particular play style.

Wasteland 2: Director’s Cut brings you choices which affect the way you play in real ways. Your decisions in building your squad, approaching an objective, or resolving a mission have a profound effect on the world and will shape the lives of those you meet forever.

Your skills won’t just affect what options you have and how you’ll play – you’ll use them how you see fit to help or harm those you come across. Sometimes, those will be the little things. Fix a trader’s cart and you might run into them later offering you a discount, or kill a mercenary captain and you won’t have to deal with her crew later. These choices add up and ripple out across the Wasteland, coming up in ways you might not expect even hours later.

But other times you’ll be called on to make bigger decisions that can change the fate of the Wasteland’s inhabitants forever. Choose to answer a community’s call for help or let it be overrun by raiders, negotiate a peace between two clans or boil their tensions over into all-out warfare, and make your reputation as saviors or stone-cold killers. And sometimes, things may not go your way even with the best intentions, if you don’t have the skills or equipment for the job.

Wasteland 2: Director’s Cut is set in post-apocalyptic Arizona and California, decades after a nuclear holocaust wiped out civilization as we know it. When the dust settled, a group of US Army Engineers stranded in the Arizona desert found themselves surrounded by the dangers of the new world – cultists, cannibals, and criminals. Taking shelter in an old state prison, and expelling those within it, those humble engineers began to help the innocents who remained – those who could not fight to keep themselves safe. Over time, those US Army Engineers became known as the Desert Rangers, upholders of justice in the Wasteland.

The game begins fifteen years after the events of the original Wasteland. You take control of a new group of recruits into the Desert Rangers, and are tasked with investigating the murder of an experienced Ranger called Ace. Quickly learning of mysterious and hostile radio broadcasts preaching death and doom to the Desert Rangers, General Vargas, your leader, sends you on a mission to uncover the truth behind those broadcasts, and put an end to the threat.

The Wasteland is full of groups looking to stake their claims. Sure, the Desert Rangers may want to ensure peace and safety, but not everyone’s so idealistic. Groups of deadly raiders like the Wrecking Crew fight and squabble over their own chunks of territory, taking pieces out of each other and anyone else who stands in their way – or just gets unlucky. Remnants of indigenous groups have been affected by post-apocalyptic life, idolizing fragments of the old world. Cults of ICBM-worshipping fanatics pay tribute to Titan and rejoice in the atomic fire of the Great Glow. Militias and mercenaries fight from the shadows to control and manipulate others from behind the scenes. And even the most genteel, civilized types often have dark secrets they don’t want others finding out.

In Wasteland 2: Director’s Cut, you’ll make your mark on these groups, whether that’s by joining with them, fighting them, or even just passing them by and hoping to not piss them off too much. Some might be your allies, and others, your enemies – and yet more just want to use you as much as you want to use them. Your decisions in dealing with the factions of the Wasteland will determine the fate of its people, as well as your own.