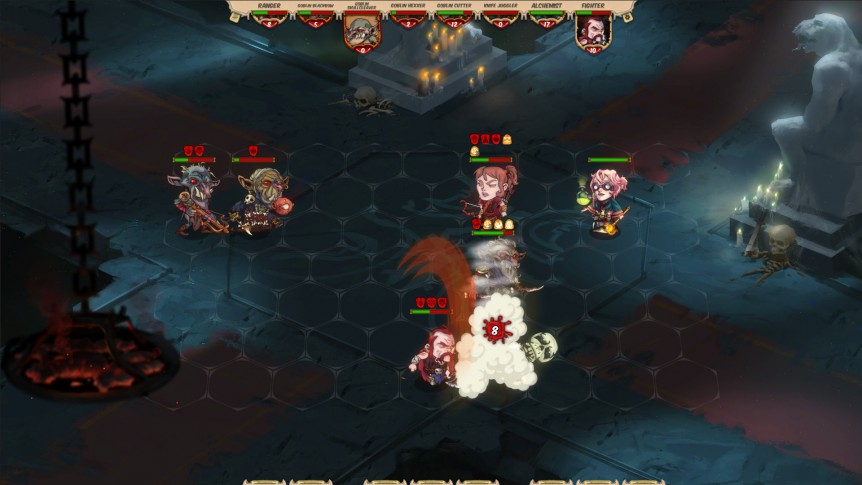 Overfall – a beautiful RPG featuring hand-drawn graphics, a dynamic open world, and a dash of unpredictability – is now on Kickstarter. Explore the vast ocean world of Dys and sail the high seas in search of your king in this stunning RPG for Windows, Mac, and Linux. Steam users can also vote on the game’s Steam Greenlight page.

Dys is a high-fantasy world inhabited by Orcs, Elves, Dwarves, Goblins, Forsaken, Hollows, Trolls, Undead, and Vorn. Each race has their own political backstories that intertwine with one another. These histories set the stage for Overfall’s series of interconnected gameplay systems – allowing for a deeply rewarding gameplay experience.

Yes, everything in Overfall is determined by the player; there are no pre-determined paths. Visit Pubs and listen to the chatter of townsfolk or take on high-profile missions for money. Hunt for pirates in oceans or face evil on islands. Forge alliances with Dys’ civilizations . . . or watch as they tear each other apart in an endless conflict. The choice is yours.

The world and story evolve based on your decisions. Every choice will have lasting consequences on your character and the entire world. If you decide to help a Dwarf early in the game, the Goblins might not appreciate it. This means that if you wish to meddle in the politics of Dys, it’s important to learn the history of each faction and discover why they’re fighting each other. Each of your Interactions with the other races will influence your own reputation with them – positive or negative.

Overfall features an in-depth, turn-based combat system that is broken down into three phases: mobility, utility, and attack. Each class has unique abilities, which can also be chained together to create devastating combinations. Don’t get too cocky: Death is permanent in Overfall – and dying will result in a “game over” screen. All is not lost, though: You get to keep any unlocks earned on your most recent quest.

“In Overfall, the story evolves and changes as you play”, says Ibrahim Yildirim, Creative Director and Executive Producer at Pera Games. “Every choice affects the world around you in different ways – from the enemies you make to the people you help. Every new game is a brand new adventure. I can’t wait to share the world of Dys with all of you!”

Availability
Overfall will initially be available for Windows, Mac, and Linux – followed by PlayStation 4, PlayStation Vita, Xbox One, and iOS/Android tablets.