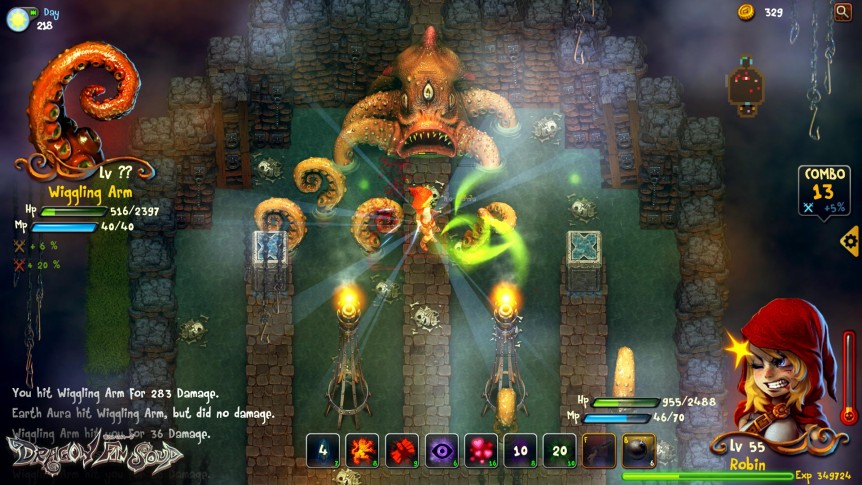 Lock up your grandmas – Grimm Bros has announced that its highly-anticipated RPG-roguelike Dragon Fin Soup is available now on PC, PlayStation 4, PlayStation 3, and PS Vita. A labor of love dedicated to the NES classics that the Bros were raised on, Dragon Fin Soup contains lush, narratively cohesive worldbuilding, intuitive turn-based combat, and a thorough crafting system, spiced with the high-stakes spontaneity of a procedurally generated roguelike and a healthy dollop of dark humor. You can get a look at the colorful, hand-drawn world of Asura in the launch trailer.

In Dragon Fin Soup, players assume the role of Robin, a rakish, shotgun-wielding Little Red Riding Hood who’d rather end her night at the local tavern than at grandmother’s house. Though on the surface Robin resembles her fairytale namesake, this wolf in sheep’s clothing is a raucous, bawdy alcoholic with a tendency to fly into berserker rages and wreak havoc on the world around her (drink one too many “health potions” and you’ll find out what that means).

The game includes three different ways to play: Story Mode, a narrative-driven campaign in which players venture through the fantastical of Asura to learn the secrets of Robin’s mysterious past; Survival Mode, a classic roguelike dungeon crawl; and the procedurally generated Endless Labyrinth Mode. In-game combat employs a turn-based grid system and requires the utmost precision and strategy, and players interested in customizing their experience can craft the armor and artillery of their dreams with over 600 crafting recipes.