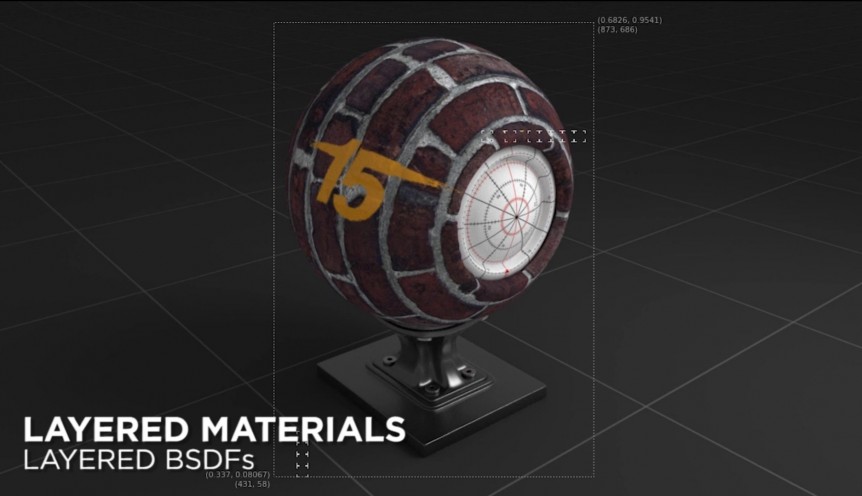 Just nine months after artists first got their hands on Houdini 14, Side Effects Software has announced the release of Houdini 15 with onion skinning, new shader building tools, crowd ragdolls and Houdini Engine 2.0.

“With this release, Side Effects is working hard to bring Houdini’s modeling, rendering and animation tools up to the level of its VFX tools,” says Kim Davidson, President and CEO, Side Effects Software. “With more game studios creating content using procedural techniques and commercial studios looking for artist-friendly tools, Houdini 15 offers a well-rounded solution.”

Model
Houdini has traditionally offered strong procedural modeling sometimes at the expense of its interactive workflow. With improvements made in Houdini 14 and now 15, modellers are now able to work intuitively in the viewport with the new tweak edit workflow, edge sliding, soft selection highlighting and new tools such as PolyBridge and PolyExpand 2D. For working with hi-res models, new retopology tools make it easy to build low-res geometry by drawing right on top of high-res geometry.

Render
Rendering in Houdini 15 is faster and richer with improvements to the Mantra renderer such as checkpointing and render view feedback. Shader building has been enhanced with a new shader library, a rebuilt Shader FX 2.0 menu, layered materials and a cartoon shader.
Houdini 15 also includes an implementation of Disney’s physically-based Principled Shader which is designed to provide artistic flexibility with a minimal set of controls. In addition, a library of royalty-free PBR ready textures will be available on sidefx.com for use with Houdini 15’s shader building tools.
Material stylesheets create a production-level workflow for creating and managing material overrides that work well with Alembic files and packed geometry. Easily set up random textures and variances in material settings to give a unique look to a collection of similar items such as crowd agents.

RenderMan 20
RenderMan 20 and RIS shading support is fully integrated into Houdini 15. RIS shaders are available in the RIS Shader Network SHOP and Houdini’s VOP context provides a native environment for building RIS shaders with OSL support.
“Pixar and Side Effects have worked together to create a first class experience for lighters,” says Chris Ford, Business Director – RenderMan, Pixar Animation Studios. “Houdini 15 offers interactive shader building tools which make it easy for artists to achieve the look they desire.”
Houdini 15 comes with a complete set of RenderMan BxDF, Pattern, and Integrator RIS shaders as well RIS light shaders and Camera, Light Probe, and Rolling Shutter RIS projection shaders. There is also a new RIS render node which allows the RIB and RIS render nodes to have cleaner interfaces specific to each mode.

Animate
The animation workflow in Houdini 15 is better than ever with onion skinning, a pose library panel, an improved character picker panel and enhancements to the dope sheet. This makes it easier to pose and keyframe characters in Houdini.
New lightweight female and male rigs provide sample characters that artists can use to explore the animation tools in Houdini. Houdini 15 also includes dual quaternion support for deforming twisting geometry and preventing volume loss.

Houdini for Games
The modeling improvements in Houdini 15 will be particularly useful for game artists who use Houdini to build procedural assets for use in game editors such as Unity and Unreal. The PolyExpand2D tool makes it easy to compute straight-skeleton and is ideal for road generation.
Houdini 15 also includes texture baking and viewport support for UDIM textures, world-space normal maps, UV mesh boundaries and overlapping UV regions. Game makers can now import and export tangent-space normal maps and convert bump and displacement maps to normal maps.

Crowd Ragdolls
Ragdoll dynamics have been added to the Houdini 15 crowd tools along with limb detachment, fuzzy logic and better crowd behaviour. It is now easier to set up material and geometry variations and tools have been added to set up explicit target locations. There is also an Agent Cam tool which creates a camera and attaches it to the head of an agent for point of view shots.

Distributed VFX
Houdini 15 will make VFX artists more productive and capable of bigger, more dynamic FX. The new adaptive PBD lets artists focus grain simulations on particles that are involved in collisions. New viscous fluids tools such as Lava, Melt Object and Emit Steam give artists quick access production-ready effects.
Fluid and PBD simulations can now be distributed to multiple nodes on your farm to create and manage bigger sims. Distribution allows artists to work beyond the capability of any one computer and the results fit together seamlessly when rendering. A FLIP fluid simulation with a billion particles or more is now easily achievable.

Houdini Engine 2.0
For artists working in other applications such as Autodesk® Maya®, Cinema4D®, UE4® and Unity®, the Houdini Engine makes it possible to open up Houdini Digital Assets in these apps. Houdini works in the background to cook the node networks inside the asset and the results are delivered to the viewport of the host application.
Houdini Engine 2.0 has been designed to separate the API front end from the compute back-end. This allows for multiple sessions per host, multiple threads per host, greater stability and can be integrated without library conflicts. This thin client has made it possible for independent developer Hideki Suzuki to complete his 3DS Max plugin. The initial release of the 3DS Max plug-in code is now on github [https://github.com/K240/HoudiniEngineFor3dsMax] with a compiled plug-in to follow in a few days.
Houdini 15 includes improvements to the Maya plug-in such as support for ramp parameters while the Unity plug-in now has support for paint input. The UE4® plug-in continues to be in beta but its planned release date is mid-November 2015.

Availability
Houdini and Houdini FX – Houdini 15 can be downloaded from sidefx.com immediately with base Houdini available for as low as $1,995 USD and Houdini FX available for as low as $4,495 USD. Both these prices include first year on the Annual Upgrade Plan which provides production-level support, and access to daily builds and dot releases.
Houdini Indie – Houdini Indie is also available for $199 USD per year. This version offers limited commercial usage for indie gamers and animators making up to $100K USD per year and cannot be used in the same pipeline as commercial versions of Houdini. Houdini Indie uses its own file format for saving scenes and assets and renders animations up to 1920×1080.
FREE Houdini Apprentice – For students and artists looking to learn more about working procedurally, Side Effects has a free Houdini Apprentice Edition which allows non-commercial usage with a render restriction of 1280×720 and a watermark.