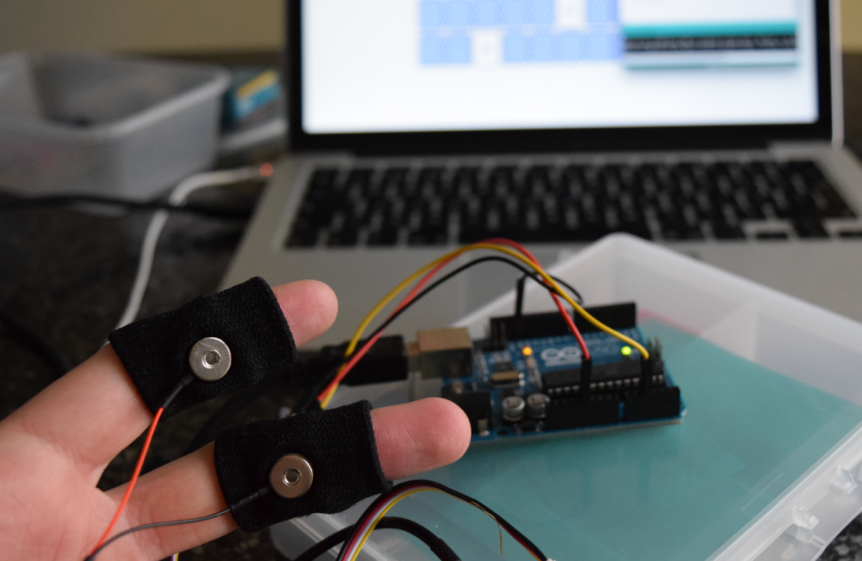 “Moodli” is what I’ve decided to call my university project which will, in fact, be the last project I do as an undergraduate computing student. In essence, Moodli is a somewhat socially based platform in which you can post your moods and there’s also a limited social interaction system that’s integrated into that. Now, I know what you’re thinking, “Ugh, this DEFINITELY hasn’t been done before…” but I’m also integrating a physical aspect to the website. I’m working with GSR (Galvanic Skin Response) in order to detect (roughly, of course) general mood values, how stressed someone is for example. The hardware consists of a Grove GSR sensor connected to an Arduino unit, which is then connected to a computer. From using these sensors, suggested moods are presented to the user, along with a bunch of moods that are associated with that biometric data. Each time you post a mood, you have 150 characters to say something about why you felt that way in an attempt to keep the website down to it’s most basic structure and level of integrity there will be no images or even links allowed in the body of text.

In short, you can post moods manually using a spectrum selection system, or with using the physical prototype I’ve created.

There is also a compare page, in which you can compare the general mood of a location with other locations as this data is taken when the user posts a mood. I’ve done this as I feel it adds an interesting element in analysing the data supplied by users. The user is also able to only view mood posts near their location by visiting the ‘local’ page.

Currently as I am in the testing phase of the project, the website is locked but will be available for anyone to use, and be able to sign up and create an account soon.

Note: I need testers for the physical prototype!