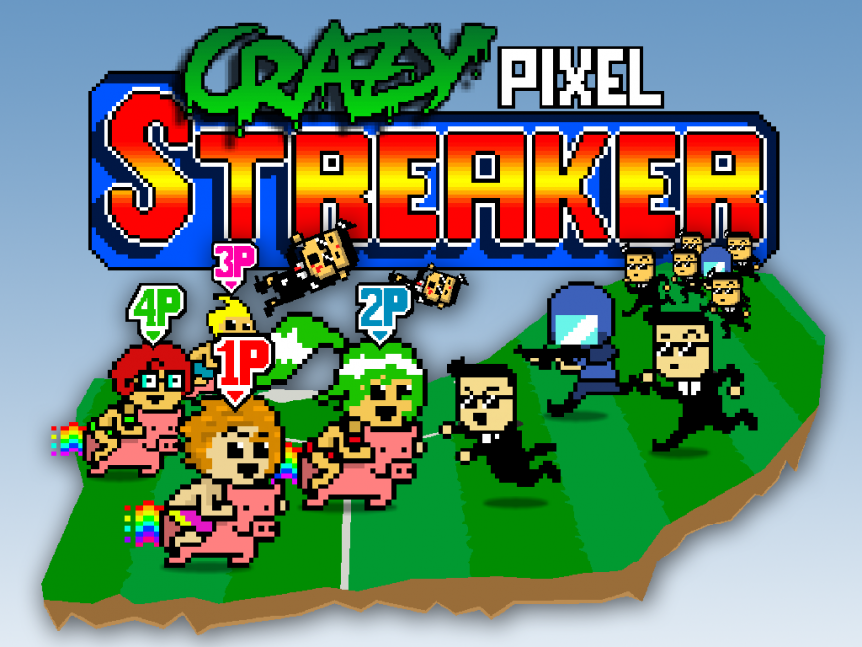 Lubiterum and The Sidekicks are proud to announce officially their partnership. The Spanish independent video game studio and the new video game label for indies will team up to spread fun and insanity all over the world with Crazy Pixel Streaker.

Crazy Pixel Streaker is a fresh and insane brawler with roguelike elements. It will drive the players into a wacky story where aliens abduct a bunch of jackasses and force them to spread chaos into the world most important sport events in order to steal the cups.

Up to four players will cooperate to beat the security in all kinds of sports stadiums, face all sorts of enemies and meet hilarious bosses. And they’ll also have to ride magic pigs!

As you guessed, Crazy Pixel Streaker is all about fun. But behind this freshness the game relies on a strong gameplay that will guarantee hours of solo or party gaming :

Guillaume Jamet, CEO at The Sidekicks, says: “I cannot say what we thought when we first received Crazy Pixel Streaker. This game was 100% improbable. But then we played and it was instantly obvious that we needed to work with these guys! Crazy Pixel Streaker is one of the most fun game we played these past years, we had to sign it!”.

Joan Godoy, one of the founders of Lubiterum says: “The Sidekicks is a brand new label with a great offer for an indie studio like ours. That is why we proposed them our game and we were thrilled by their enthusiasm about Crazy Pixel Streaker. With their support we can now focus on finishing the game and make it even craziest than we ever thought!”

Crazy Pixel Streaker will be available on PC on Q1 2016 and a few months later on PS4 and Xbox One.