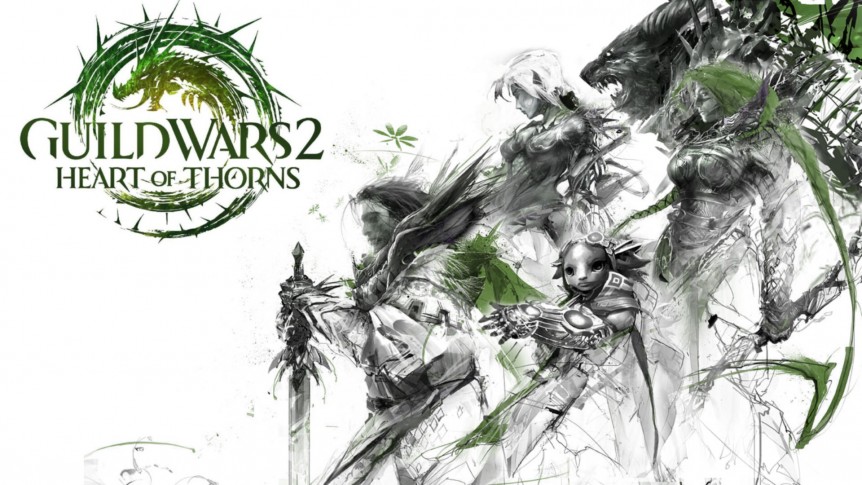 Heart of Thorns, the first expansion for Guild Wars 2, will start his first beta weekend on August 7th. More technical details about the beta can be found on their website.

Founded on the idea that the journey is the goal, the Heart of Thorns expansion continues the Guild Wars 2 tradition of challenging the conventions of MMOs to fulfill the promise of what online worlds should be.

The Mastery System: We’re reimagining progression with our new Mastery system. Explore new training opportunities for your character beyond level 80 and master abilities like hang gliding in the jungle, tearing the bark off of heavily armored Mordrem, or building new collections that earn precursors to a legendary weapon.

The Heart of Maguuma: New adventures await you in the heart of the Maguuma Jungle. Confront the growing hordes of Mordremoth’s minions, discover allies from ancient civilizations, and battle new enemies.

New Profession – Revenant: Channel legendary powers to slaughter foes and unleash chaos on the battlefield with our brand new profession: the revenant. Enter the field of battle heavily armored and equipped with the otherworldly powers of the Mists.

Guild Halls: Your guild has roamed the world together. Now, it’s time to claim a piece of it. Work with fellow guild members to claim and grow your own guild hall in the heart of Maguuma.

PvP – New Stronghold Game Mode: Gather supply to hire soldiers. Battle for control of heroes. Man the trebuchet to defend your stronghold, and storm the enemy gates to defeat the guild lord! Use our new guild team feature to team up and battle to the top of the leaderboards. Stronghold offers an entirely new way to play competitive PvP in Guild Wars 2!

WvW – New Borderland: Experience epic battlefield combat like never before in World vs. World’s latest core addition, the new Borderlands map. Navigate treacherous heights with traps that blow your foes to the depths below and ferocious defenders to help keep the enemy at bay. Map objectives will be more important than ever before, as they’ll unlock new strategies, tactics, and play mechanics that you’ll want to use to your world’s advantage!