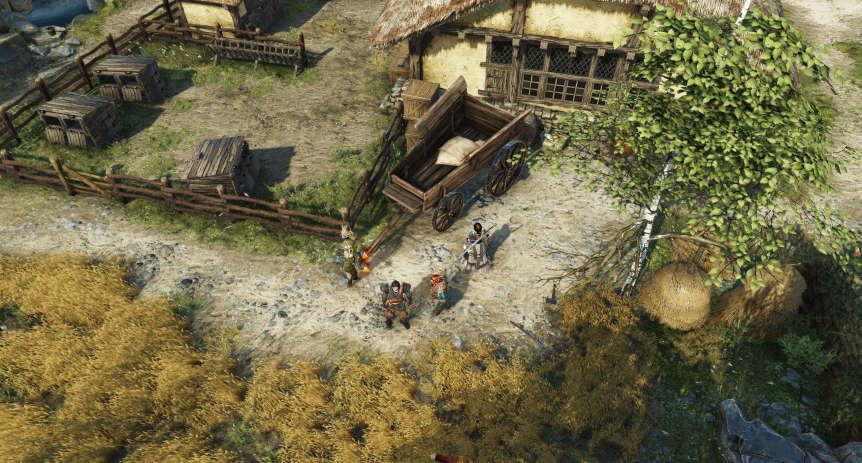 The Divinity: Original Sin 2 Kickstarter campaign has been a runaway success, climbing faster than Larian Studios dreamed possible – getting founded in the first 12 hours  and unlocking two of the new Stretch Goals even before being revealed!

The stretch goals for Divinity: Original Sin 2 include the hardcore Strategist Mode, additional Skill Trees to be chosen by backers, unique Racial Skills, and the option to give your character an Undead Origin or even journey to the Hall of Echoes, land of the dead.

Here the details about the stretch goals:

Akin to Divinity: Original Sin- Enhanced Edition’s Tactician Mode, Original Sin 2 will feature a brand new difficulty called Strategist Mode. Rest assured this difficulty tier will consist of much more than a simple numbers game. Yes, your enemies will hit harder, but that is far from all! Each and every fight in the game will be redesigned for Strategist Mode so that enemies are smarter, often come in greater numbers and use a host of skills and tactics they won’t use in lower difficulty modes. If we reach this stretch goal, the fights in Original Sin 2 will receive this epic treatment from the get-go.

Divinity: Original Sin is rife with spectacular skills, and besides the many new ones we’ve already planned for Original Sin 2, we want to add even more unique skills to the repertoire. We have quite a list and will let our the backers pick a brand new skill tree, featuring at least 16 skills each, from among a host of new proposals when the campaign ends. New proposals, you say! Such as?

Well, here are a few to tickle your imagination:

Polymorpher – As a polymorpher, your body is your oyster. Grow sharp-as-swords horns, poisonous tentacles (with the bonus of further reach) or even wings that allow you to dash and dive across the battlefield. You can even change completely into – what? Something monstrous, that’s for sure…

Trap Master – Craft mines, place them in strategic positions and lure the unwitting enemy (or “ally”) into your traps! At higher levels you’ll be able to toss your deathtraps into groups of foes; taunt them so that they run blindly into your snares, and even craft bombs that you can sneak into an enemy’s pocket. Tick. Tock. BOOM!

Bard – Inspire your allies to perform even greater feats of magic and carnage, then pacify, confuse or lull to sleep your enemies with songs and music. Of course, you don’t have to be the party’s unwavering champion. You can also weave lies into your tales, which can influence the attitude of NPCs in various ways. Sing your own praises and see them cheers you; paint your friends as cowards and see them be hailed with contempt!

Unarmed Combatant – This is for the hands-on fighters that don’t want to dance around their targets, but get down and dirty by going for chokeholds and body throws. Wrestle your foes with bare fists, or go for some extra piercing power with vicious knuckles and claws.

Summoning Master – To be able to summon allies is a very powerful skill, but as a master you’ll be able to summon more than one extra ally. Other skills will include redirecting incoming damage to your summons; sacrificing them to heal you, or blowing them up to wreak havoc among massed enemies.

Juggernaut – If you want to role play a bloodthirsty maniac that thrives on gore and pain, this is the one to get. Get stronger as your health drops; swing mighty great-swords or dual-wield axes; drown your enemies in spilled blood. You can even sacrifice your own hitpoints in return for massive, area-shattering blows. Beware of friendly fire though – if you even care, that is.

Guardian – A born protector, this sword ‘n’ board wielding warrior prioritizes a strong defense over offense. Your shield will become a wall behind which you -and your allies- can close in on the enemy unharmed. Your provocations will also turn your foes’ attention toward you, but that’s ok because other skills include becoming nigh invulnerable for brief amounts of time.

Alchemist – The powers of alchemy become as weapons in your hands! Throw potions like grenades; coat your weapons with poisons and curses; control clouds of steam, lightning, miasma and more; bask in the vastly superior effects of every potion you can get your hands on!

In Divinity: Original Sin 2, your unique origins will radically change the way you experience the world around you. Of course, since combat is one of the central ways in which you’ll engage with this world, it’s only sensible that your origins and your skillset should intertwine.

When we reach the $1M mark, we’ll develop a set of race-specific skills, abilities, and talents reflective of each race’s background and strengths.

Imagine: a Wood Elf able to summon an army of shambling trees; a Lizard recalling the devastating powers of his draconic ancestors; a Dwarf with the authority of the Empress; a human so good at pickpocketing, he can even catch his own party mates unawares…
$1,200,000 Stretch Goal: Undead Origins

In Original Sin 2, no longer will you have to be human all too human alone. You can be a dwarf too, an elf, yes even a proud lizard! But if we reach this stretch goal, you’ll be able to tell the tales of the dead with undead origins! That’s right: at this point we will add the undead as a playable race, complete with origin stories. Let us give you an example! Imagine, if you will, a story that goes something like this:

Adelard has been a warrior since his early teens, first in the armies of the Divine; later as a sword for hire. There wasn’t a force in the world that could best him, or so he thought! Because one day an orc with a temper did a number on him and his crew, and he ended up dead in the grass, speared through the heart.

That is how he was found by a necromancer, who, impressed by the muscle on Adelard’s dead body, decided to resurrect him and use him as a puppet-warrior to do his bidding. But there is something different about undead Adelard. Unlike any other victim of necromancy, he remembers who is and he knows what he has become.

Horrified, disoriented, he flees from his vile enslaver and sets out on a journey home, a journey which he realises will be fraught with danger. He may be more or less welcome among the scattered bands of Black Ring, but his travels will take him through Divine Order territory where he’ll be forced to mask himself or be challenged by every Magister he meets.

All he longs for now is the comfort of home, a place where he will be welcome; where he can learn to live, perhaps, with this waking nightmare. But with each step closer to his goal, doubt and fear assail him more and more. What will they say? His wife; his mother; his brother… For who is Adelard now?

With all the fantastic skills we’ve dreamt up, we’ll need plenty of manpower to implement them. At this mark, we’ll again open up a vote to let the backers decide which other of the skill trees listed at the $700,000 tier you would like to see in the game. Voting will be done by backers after the campaign ends.

Some Rivellonians live in fear of it; some write songs of it; others still are sent there far before their time. When we reach $1,500,000, we’ll send you to the Hall of Echoes, land of the dead.

You, unique among the living, will be able to travel to and from this spirit world, where you’ll uncover mysteries never before discovered by mortal eyes. You’ll gain access to occult wonders, and you’ll come face to face with those you’ve lost– and those you’ve dispatched.

The best part – you’ll be able to make this your home base!